The Kendeda Building for Innovative Design switched from temporary to permanent electricity in April — a milestone as the deep-green project on the campus of the Georgia Institute of Technology heads into its construction homestretch.

With heavy rains and materials challenges slowing things down a bit, construction is now expected to reach “substantial completion” in July, As the various subcontractors enter the homestretch, here’s a view in photos at construction highlights so far in 2019. For a closer look at the processes and materials, click the “in-depth” links where they appear. (For a photo essay on construction in 2018, click here). 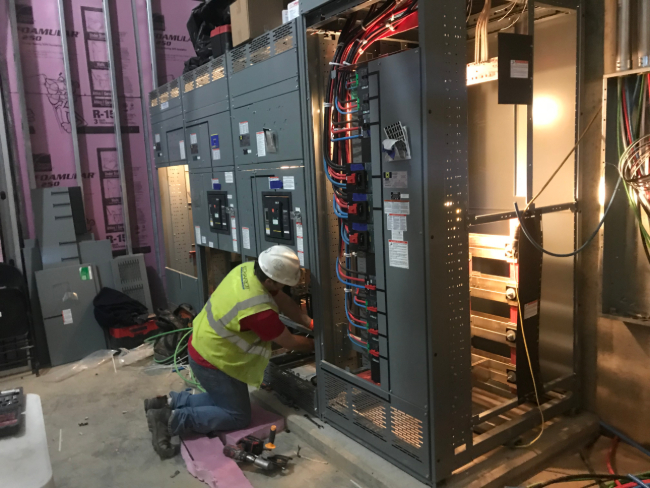 ELECTRIFICATION: In early April, an electrician for Eckhardt Electric prepares the main switching room in the basement for the switch from temporary to permanent power. 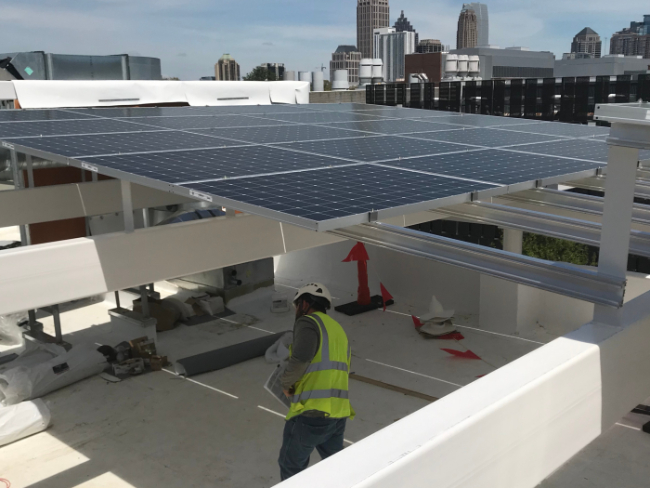 SOLAR INSTALLATION: The building isn’t yet tied to its permanent power source: 915 solar panels are in the process of being installed on the canopy over the building’s roof by Hannah Solar. The solar array is projected to provide more than 105 percent of the power that will be used by the Kendeda Building — making it one of the first net positive buildings in the Southeast. 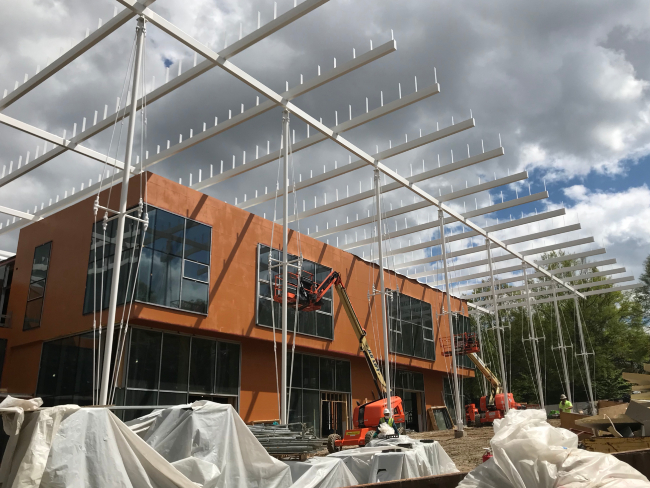 THE CANOPY: The most dramatic change on the outside of the building since the start of the year has been the outsized steel canopy that will serve as the rack for the solar panels. Installed by Southeastern Steel, it also will shade the generously sized porch on the building’s west and south sides. 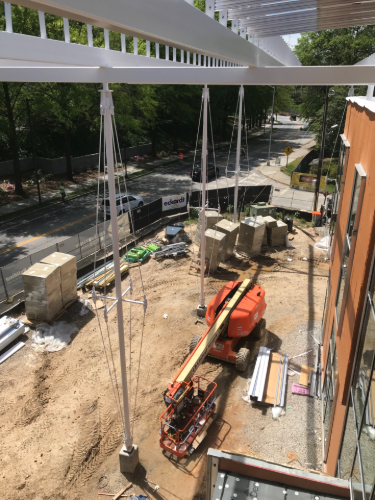 STEEL TRUSS COLUMNS: Where it overhangs the building, the canopy is supported by distinctive steel columns, designed by structural engineers at Uzun + Case. The canopies wide brim defines the large porch, some of which is considered programmable space. The steel trusses that protrude as triangles along the sides of the main post stiffen the column while requiring less steel to be used in construction. 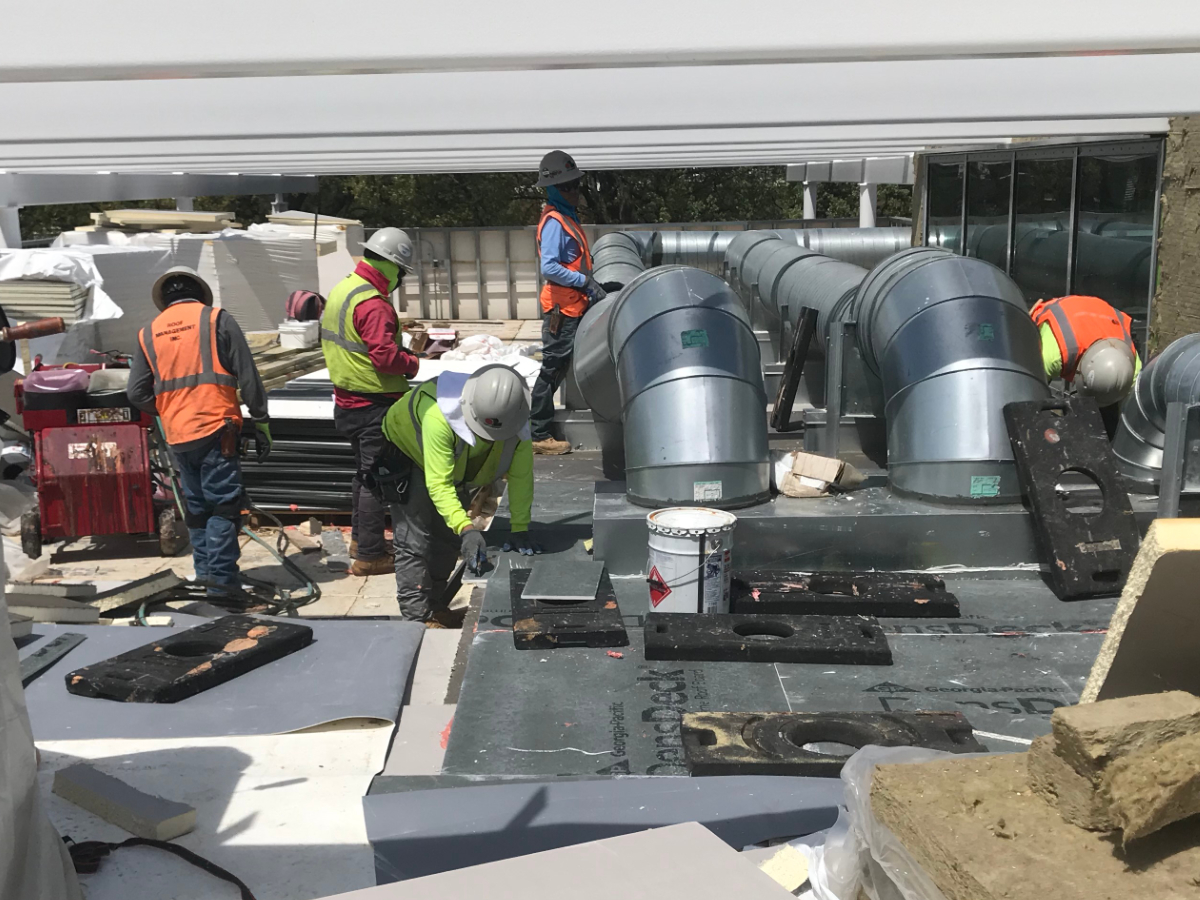 ROOF: As with any construction project, completing the roof was vital before moving on to exterior finishes and much of the trade work. The Kendeda Building construction team had the misfortunate of near-record amounts of rain before “dry-in” was complete. Here, employees from Roof Management Inc. work around ducts to lay down material for a 60-millimeter thermoplastic polyolefin (TPO) membrane roof. 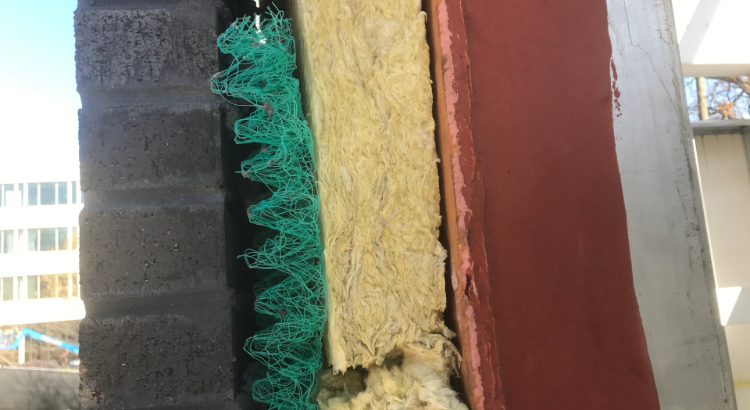 THE ENVELOPE: This cross-section from a model built to demonstrate proper installation for subcontractors shows the main layers of the heavily insulated and moisture resistant building envelope. From right to left: gypsum-board sheathing painted with a moisture barrier, mineral wool insulation, a mortar guard and brick. Where metal cladding replaces brick as the exterior face, a vapor barrier replaces the mortar guard. Inside the envelope, an additional layer of un-faced fiberglass batts is being installed between the metal studs. 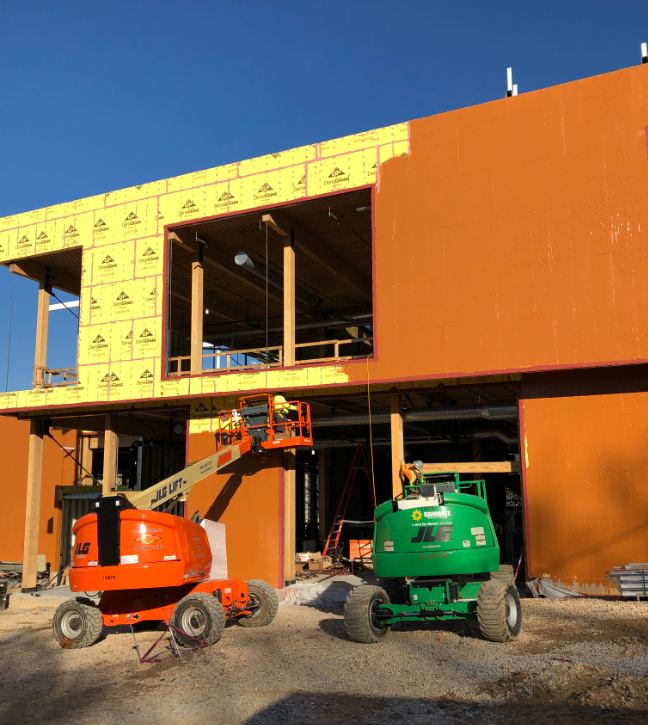 MOISTURE BARRIER: Work continued on parts of the exterior throughout the winter and spring of 2019. Metro Weatherproofing applied Prosoco R-Guard air-and-water barrier to the outer face of the gypsum sheathing. IN-DEPTH 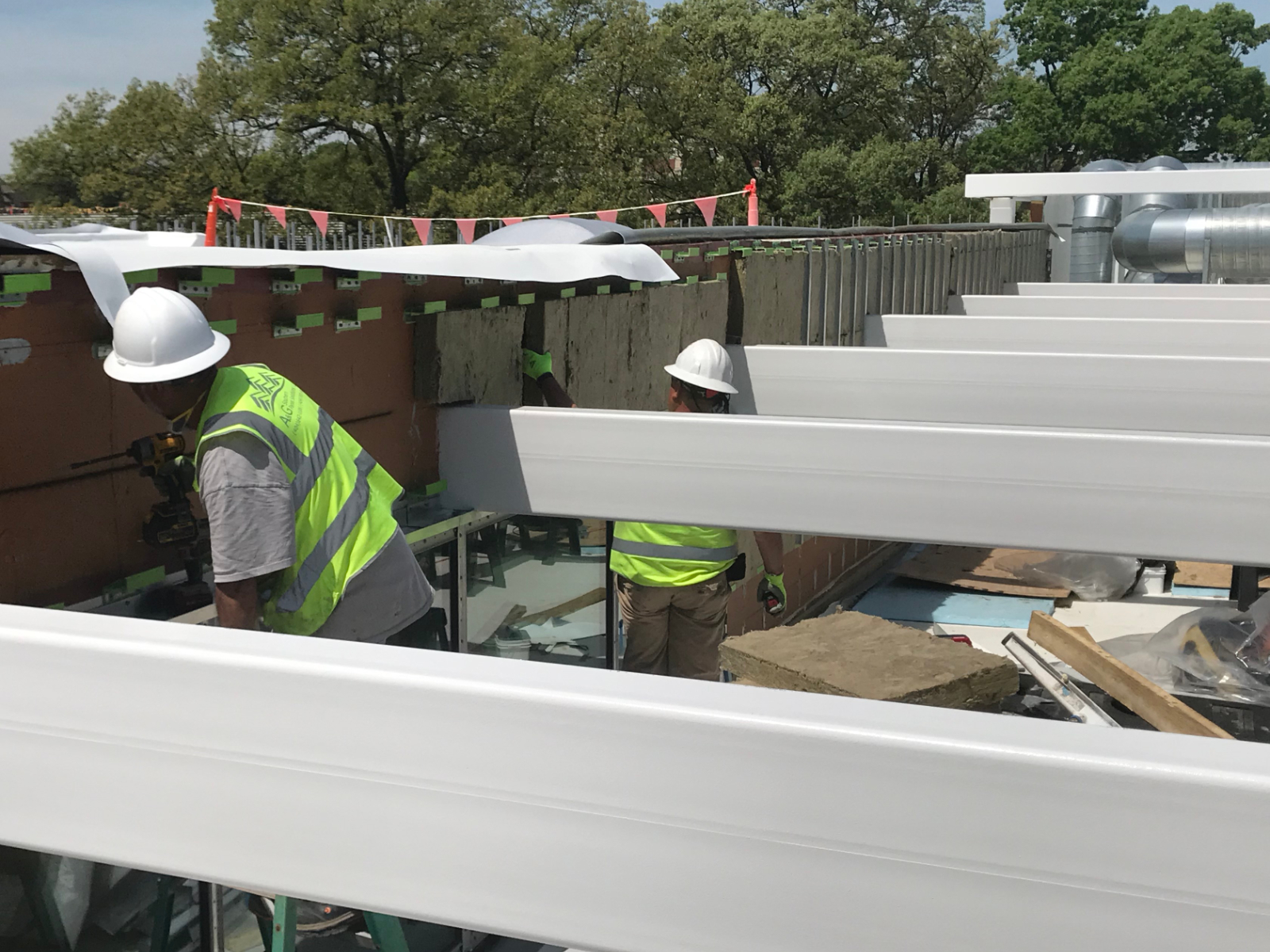 INSULATION: Employees for Miller Clapperton install brackets (foreground) and mats of Owens Corning Thermafiber insulation (background). The mineral wool insulation is composed largely of slag (waste material from iron smelting) that has been melted, formed into fibers and then pressed into mats. IN-DEPTH 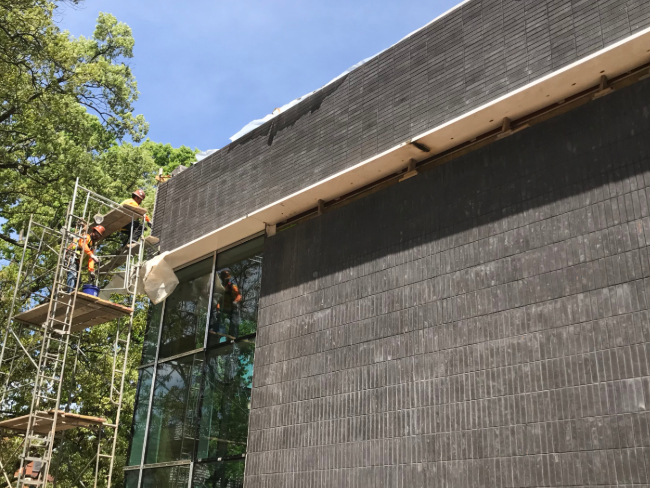 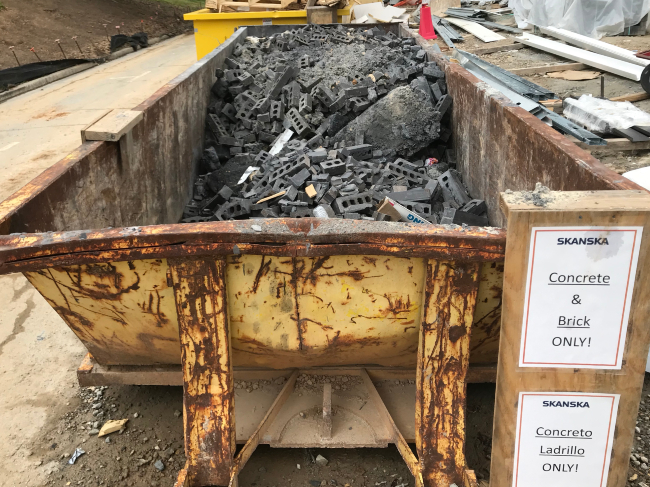 WASTE: A goal to reduce landfill waste by more than 90 percent requires far more separation of recyclable materials than on most construction sites. Here’s a dumpster restricted to brick and mortar, which will find new life as aggregate material. IN-DEPTH 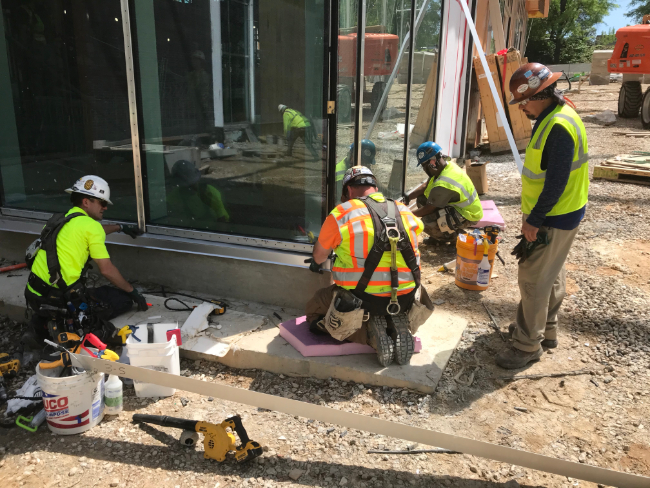 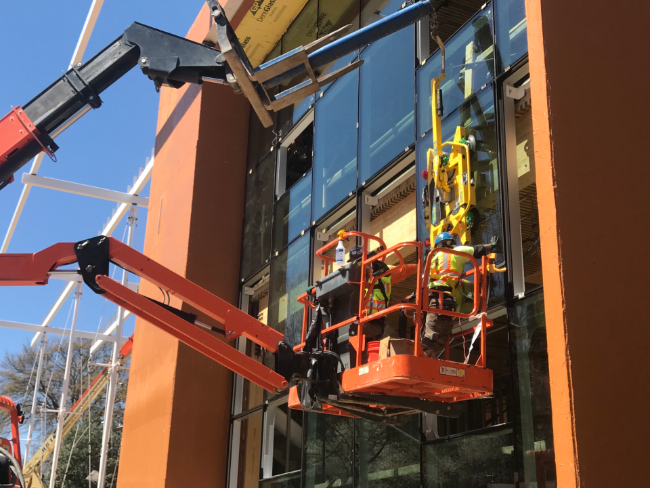 GLAZING: The storefront system is fitted with triple-planed glazing from Viracon, the largest fabriator of commercial glazing in North America. IN-DEPTH 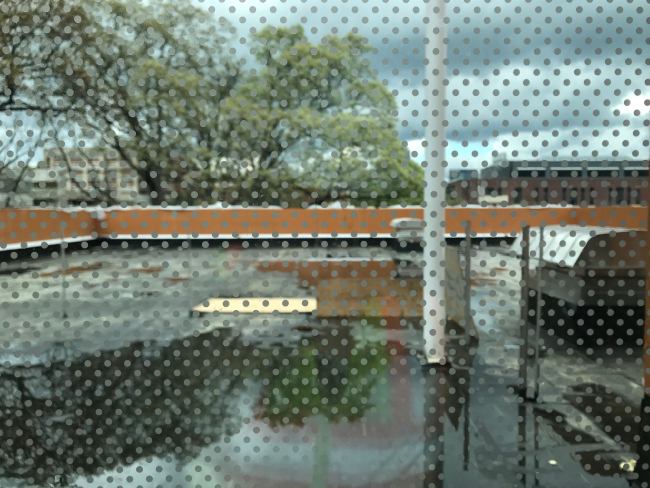 BIRD-SAFE GLASS: Much of that glazing is customized to with a dot-matrix pattern to dissuade birds from fatally colliding into the windows. IN-DEPTH 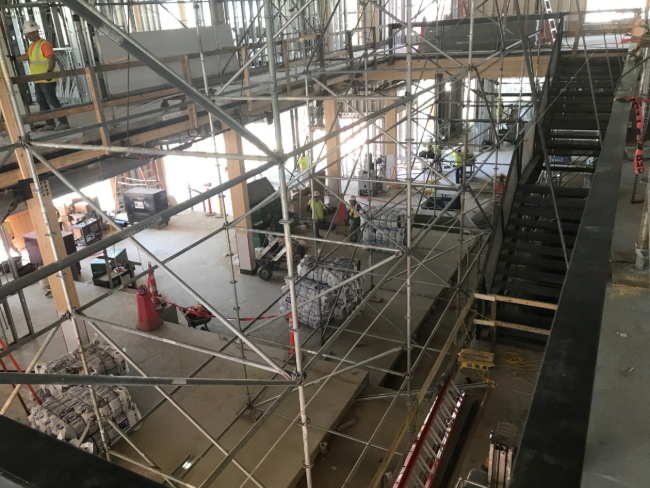 MOVING INSIDE: The focus of the project shifted to the interior as the building’s shell neared completion. 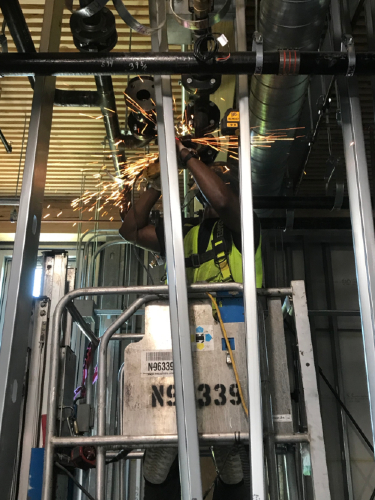 PLUMBING: Kevin Rice of Batchelor & Kimball Inc. grinds a black steel pipe during installation of the building’s potable water system. Rainwater will be collected on the roof and treated in the basement. In the photo at the top of this article, Patricia Powell, also of BKI, is welding a similar water pipe. 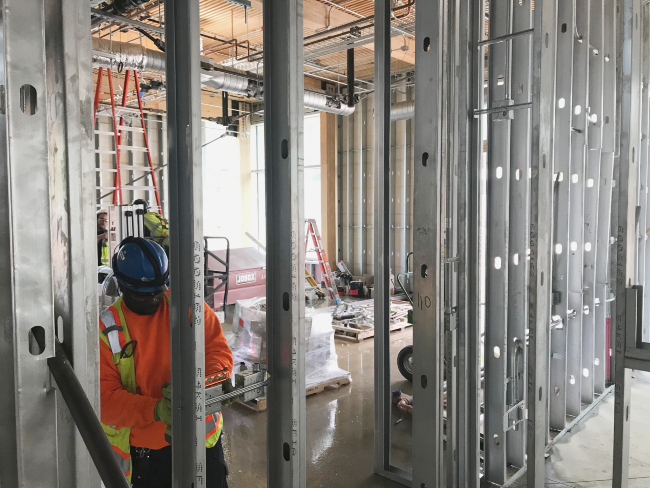 COMMUNICATIONS: John Francis of Southeast Electrical checks the level on a bracket to carry communications wiring. 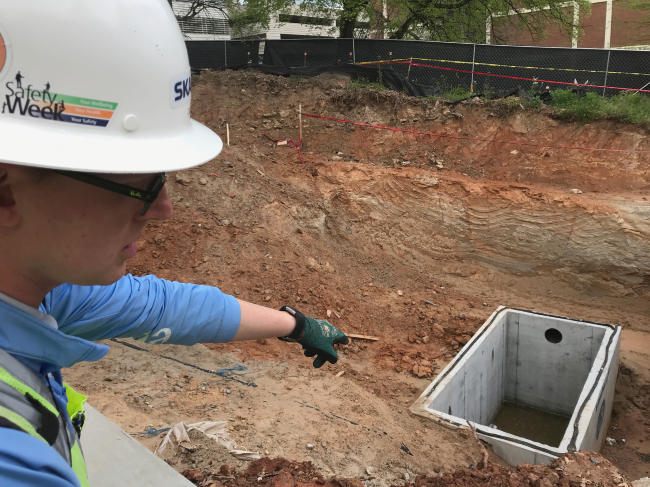 LANDSCAPE: While the interior went into full swing, other subcontractors were able to begin work the infrastructure for the landscape’s intricate outdoor water cycle.  Here, Caleb Ogden, assistant site superintendent for Skanska USA, points to an underground greywater storage tank. Used greywater from the building will be pumped from here to a constructed wetland for treatment before returning to the natural environment. The building is scheduled for completion at the end of May, but don’t be surprised if completed finishes and landscapes bleed into June.

TAKING SHAPE: By mid-May, flowers were blooming, students had graduated and almost all the solar panels were installed on the Kendeda Building’s canopy, giving passerby a better sense of the dramatic look that the solar array provides for the building.