Just in time for the holidays, here’s an informal status report — in the form of a few snapshots — on the Kendeda Building for Innovative Design at Georgia Tech.

Atlanta’s first Living Building Challenge project is modeling techniques and materials at the leading edge of sustainability. One objective of the building is to help transform sustainable design and construction in the Southeast. But in many ways, the construction process is quite conventional for a commercial project.

The design (by an integrated team that was led by architects at Lord Aeck Sargent in Atlanta and the Miller Hull Partnership in Seattle) is being implemented by Skanska USA, with the help of 50 or so subcontractors. 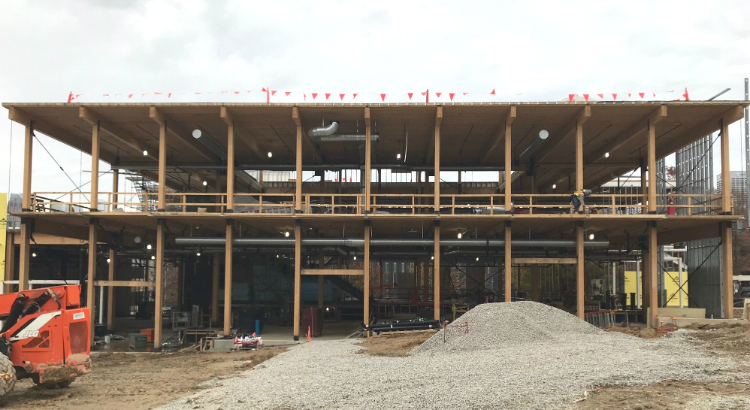 Mass timber: Glue-laminated posts and beams and nail-laminated floor-panels were installed by Universal Timber Structures out of Auburndale, Fla. All the wood is either certified by the Forest Stewardship Council or is salvaged. The Kendeda Building is among the first in a new generation of commercial-scale mass timber projects in Atlanta. But the low-embedded carbon costs of wood, as well as its aesthetic value, seem bound to make this resurgent structural approach more popular. 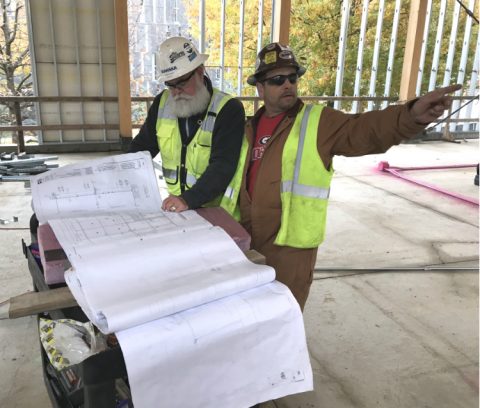 The superintendent: The Kendeda Building is “either going to force me into early retirement or I’ll make it through to the end,” jokes General Superintendent Dennis Hortman of Skanska USA. Hortman (left) is discussing progress on the building envelope with Billy Archer of Ochoa Construction. The veteran of some 100 building projects can be counted on around the site for his candor, whether that involves demanding that subcontractors stick to their schedules or musing about the exacting standards of the Living Building Challenge.  He’s retiring after 40 years in the construction business, the last 34 for Skanska. But Kendeda Building will introduce plenty of young Skanska talent to the world’s strictest green building platform. Four other Skanska employees who are managing the project onsite — Monica Martelly, Jimmy Mitchell, Caleb Ogden, John Parkman and Matt Williams range in age between their early 20s and mid-30s. 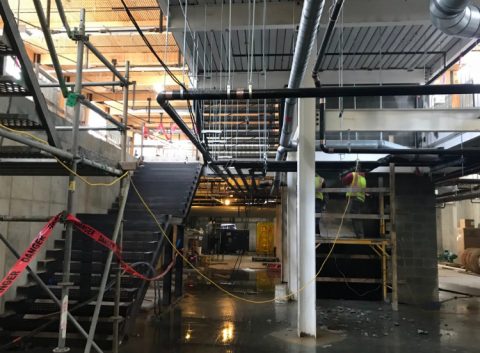 The basement: Termites and soil moisture make wood a risky choice for foundations in hot, humid climates. So, it’s not surprising that the design team called out steel for structural support in the basement, and concrete for the foundation and basement walls. The design team called for reducing the carbon emissions embedded in the lifecycle of concrete by requiring the supplier Thomas Concrete to use a new technology. By injecting a controlled amount of captured carbon dioxide back into the cement mix, the CarbonCure process offsets the huge amount of carbon that’s emitted when concrete is made. 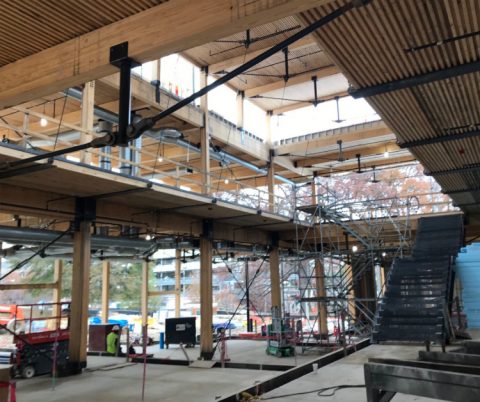 The atrium: Once the walls, doors and windows are place, the core of the building won’t be as open as it is, of course. But you already can get a good feel for how airy the atrium will feel to those who visit the completed building. In addition, many of the finishes already are taking shape, because the glue-laminated posts and beams, the black steel bracing and the fluted wood ceilings all will be exposed in the finished building. 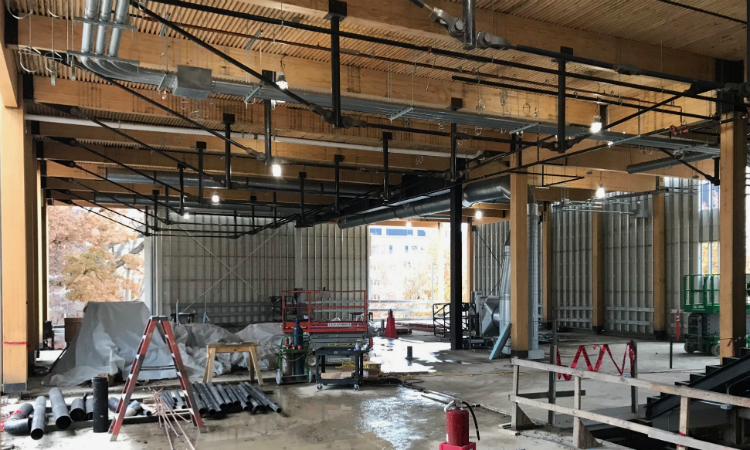 The auditorium: While the rest of the building will feature radiant heat and cooling supplemented by a dedicated outside air system, the auditorium at the northern end will have a more conventional high-efficiency HVAC system. Initially, the auditorium was to rely on a displacement HVAC system, which tightly controls the flow of air via low-induction diffusers. In a late cost-cutting maneuver, however, engineers recommended replacing displacement system with the more conventional system. Although the conventional system won’t be as efficient, they determined that increasing the power-generating capacity of the building’s solar array would cost less than investing in the displacement system. 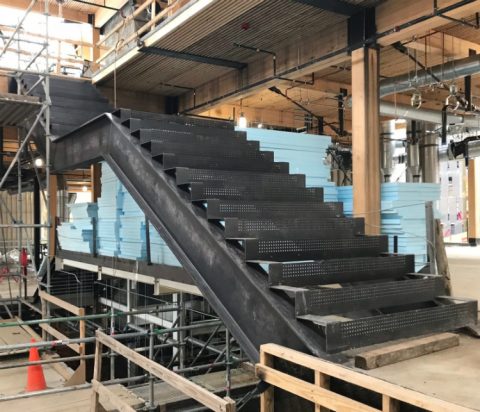 A big step: The steel frame for the monumental staircase in the center of the atrium was put in place earlier this month. The stairs themselves will be formed from heart pine joists that were salvaged during a restoration Georgia Tech’s 130-year-old Tech Tower. Southeastern Steel has completed its work on this stair, on another stair set in the front of the building, and on a limited amount of framing. Its workers must now turn to building a platform for the rooftop solar array. 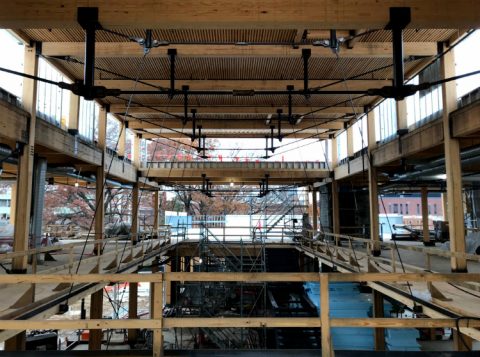 The second floor: Queen trusses that strengthen glue laminated beams on the atrium’s popped-up roof in this view from the second floor, looking north. The higher ceiling creates a gap for clerestory windows that will flood the atrium with indirect light. The temporary rail will be replaced by work counters overlooking the atrium. Those counters will be milled from fallen trees collected on campus. 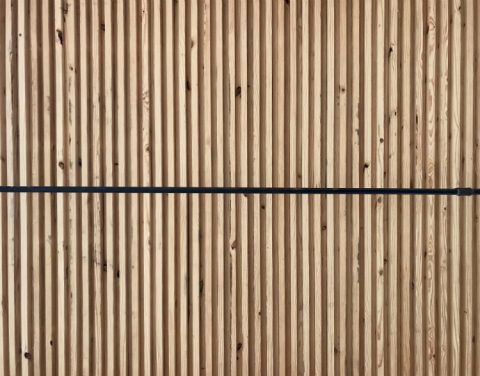 Fluted ceilings: The floor panels consist of FSC-certified two-by-sixes alternating with salvaged two-by-fours, all nailed together by apprentices who’d been trained by the nonprofit GeorgiaWorks. The fluted pattern on the ceilings above the both main floors wasn’t designed that way just for the savage points or the interesting look — the pattern is expected to suppress noise throughout the building. 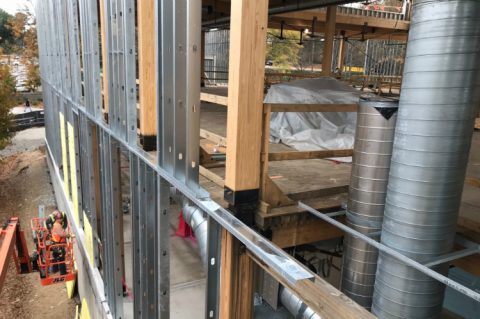 The building envelope: Workers from Ochoa Construction attach gypsum sheathing to a steel framing that they installed earlier in the month. Ochoa is still in the early stages of creating a building envelope that must be extremely tight and well insulated to help the building to attain its goal of net positive clean energy. 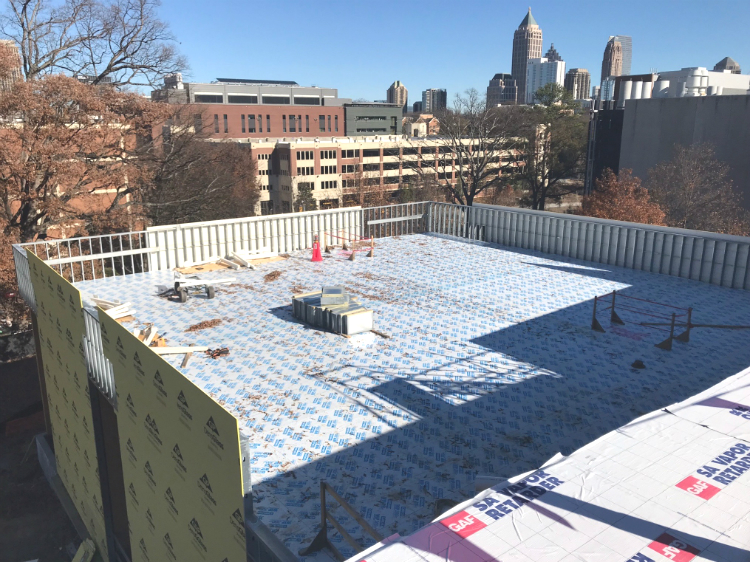 The green roof: Roofers have begun their work above the atrium, which will become a large patio accessible from the second floor. The green space will include edible plants and even bee apiary. 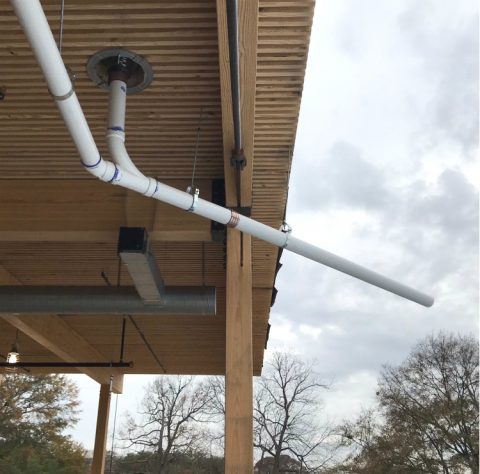 Rainwater preparations: A high-density polyethylene pipe terminates — for now — in mid-air. Eventually, it will carry water from the roof into a rainwater collection system, which will begin to shape form early in 2019.  Georgia Tech Facilities Management staff and members of the project team have been working together and even performing sample tests to satisfy local permitting officials that onsite treatment of rainwater (for potable use) and wastewater (for discharge into the environment) will be safe. 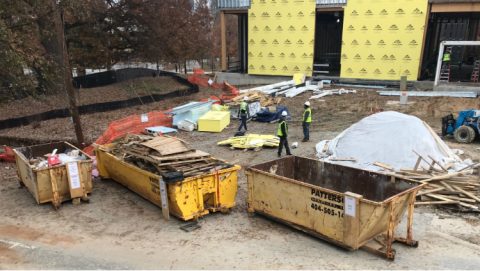 Waste reduction: Subcontractors are trained to sort leftover materials into recycling bins. The strict recycle protocol is one part of a Materials Conservation Plan designed to divert more materials from the landfill than are sent to the landfill during construction. The last resort for material that hasn’t been used in the building, repurposed or recycled is a trash container. 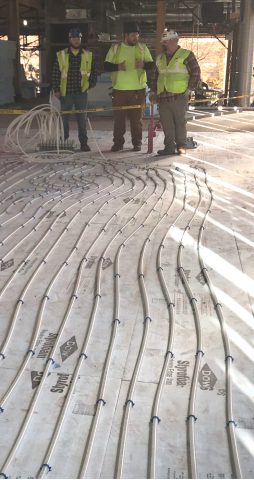 The radiant floors: Plumbing foreman Mike Snyder (center) confers with fellow Batchelor & Kimball Inc. employees as they lay out cross-linked polyethylene, or PEX, tubing for the radiant floors. On both main floors, loops of PEX tubes will run from manifolds across a thick layer of foam-board insulation and will be covered by a “topping layer” of concrete. BKI began laying out the floor this week. The company will play a larger role onsite early next year — it’s employees are are installing both the plumbing and mechanical systems for the building.