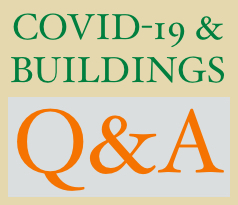 Anthony Kane was trained as an architect. But he’s been immersed in the world of infrastructure for more than a dozen years now — first as research director at Harvard’s Zofnass Program for Sustainable Infrastructure, then as lead developer for the Institute for Sustainable Infrastructure’s Envision Rating System, and now as president of ISI. Over that time, he’s found the sector to be inherently resistant to innovation — although, he says, often for “good reasons.”

Now, Kane hopes, the COVID-19 pandemic will jolt the agencies and companies that design, build and operate roads, airports, the power system, sewer systems and all manner of other infrastructure into incorporating sustainability and resilience into their projects and operations.

I interviewed Kane for another in our COVID-19 & Buildings Q&A series. His answers have been edited for clarity and length. If you’d like to check out more of our interviews with leaders on the potential changes for sustainable design and construction to the pandemic, please click here.

What aspects of sustainable design for infrastructure might help to combat viral pandemics?

Some of these things are already addressed in certain areas of our [Envision] system.

We have a category called “Quality of Life” that focuses on how the project affects the well-being of individuals and communities. Over the last few years, the entire industry has fallen back on its heels and become minimally compliant to code. But there’s a lot more that you actually could, or should, be doing to address problems that are larger than any one project, that affect people’s health and the entire community.

The current code isn’t adequate to address issues like health. I’d put money down that we’ll start seeing certain areas — probably airports, for instance — changing as a result of this, putting in place a lot more practices that protect people from infectious diseases.

They will also be looking at how they address operational plans in the case of a pandemic. That falls at the other end of our system. We have a category called “Climate and Resilience.”  Pandemics are an example of many types of things that can happen that resilient systems should be prepared for.

Also, there’s the issue of being prepared for multiple disasters at the same time. We’ve been very fortunate. If [the pandemic] had happened during the California forest fires, or Hurricane Maria or Harvey, it would be much more difficult.

I think we’ll see some changes in the physical design of infrastructure, but we’ll also see a change in operational, and health and safety training to ensure that critical systems can operate in the event of a pandemic

That question, when you get down to it, is about the mission of our organization. There is no single reason. There are probably 15 reasons, and it’s almost like you have to solve all of them to get infrastructure to change so that it’s more sustainable.

One is that infrastructure is a very risk-averse industry for a lot of reasons, and a lot of them are very good reasons. My background is in architecture, which is exactly the opposite. Architects are encouraged to create something fresh and new [with each project]. Within the infrastructure community, there are certainly a lot of innovative ideas and innovative people. But there’s also a lot of inertia. You’ve got legal reasons. No one wants to take a risk on a renewable energy idea if there’s a risk that it will make energy less dependable.

There’s also a challenge around the governmental structures that we have set up to guide much of our infrastructure development — all the agencies, bureaus, authorities. They’re risk averse because they’re given a relatively narrow mission. They are focused on [delivering a specific service]. But they also can kind of work against each other. For instance, we know that bioswales along highways improve water quality. But it’s not such a priority when your job is to build roads. The transportation department — they’re not receiving the benefits of that additional cost, and it’s not what civil engineers who design highways typically think about as the core part of their work..

We have to break out of these governance silos. If we ever want to see [broad adoption] of nature-based solutions, we would have to completely retool the agencies.

[In addition], the professional guidelines on how we design infrastructure have always been based on looking backward to 30 years of performance. But we need to look forward. We need infrastructure that will do what we need it to do for the next 30 years.

What makes you think the covid-19 pandemic could play a role in changing the narrow focus of infrastructure projects?

I do think we dropped the ball about a hundred years ago by moving infrastructure out of sight and out of mind. The engineers were so good at doing their jobs that everybody forgot about it.

I’ve seen that changing a little bit before the pandemic. People are getting more aware.

Now [during the pandemic], there’s this new appreciation not just for healthcare workers but for people who work in the food chain — the people who are restocking the shelves and processing the food and doing deliveries, who are sort of on the front lines because of that. When you’re in this kind situation, you wake up to start appreciating how you get those things.

That should extend to infrastructure. The sewage workers are going to work every day. The power industry. Buses. Trains. Imagine being in your house and the water won’t flush away, or we’re sitting in our homes, and there’s no power.

The other thing is that people can now see that their actions make a difference. Look at these  reports on lower carbon emissions and clear skies in Los Angeles. I hope that gives us a little bit of a wakeup call that, one, we are impacting things, because we see the difference, and two, that changing our behavior is possible.

These are the kinds of things we’ve struggled with in infrastructure, because it’s such a long-term thing. But I think there have been some nuggets within this disaster that tell us about our ability to change.

It’s become a running joke in D.C. that a big infrastructure bill is right around the corner. But now there’s talk that it really might happen because a stimulus package will be needed to get the economy going.

Obviously, they’re considering infrastructure spending, and I hope they’ll do a better job than they did in the last stimulus. There was some disappointment in the recession stimulus that there was a focus on shovel-ready projects. That’s going to buy us the usual stuff. There needs to be more of an emphasis on new design ideas.

We’re at a natural cycle in the life of our infrastructure. Much of it was built shortly after World War II, and we’ve been putting off improvements. So we’ve got, like, $4 trillion in needs built up.

We need to rebuild it as the infrastructure of the future. Almost worse than not doing anything would be getting that infrastructure that doesn’t take into account its broader impacts or that’s not resilient, and then having to live with yesterday’s infrastructure for decades to come.

I’m not expecting the federal government [under the current administration] to put a high emphasis on that spending to be sustainable and resilient. But we do see a lot of emphasis at  the local level of communities that do want their infrastructure spending to go toward sustainability. The test will be whether the new funding will allow that sort of thing.

Isn’t there also the possibility that only infectious diseases will get attention and that all these other critical needs, like climate change and water quality, will be pushed to the backburner and get even less attention than before?

It might be one of those things where only time will tell. It’s hard to judge what will happen in the middle of the crisis.

If we don’t consider all these other risks, we’ll just be jumping from crisis to crisis. We need our infrastructure to be resilient to storms and sea level rise and fires, along with pandemics. I think it’s more like we have to put infectious disease back in a list where it always belonged.