Carl Seville (AKA  the “Green Building Curmudgeon”) got to a story that I’ve been meaning to tell about the blower-test for the Kendeda Building for Innovative Sustainable Design. That makes sense because his company, SK Collaborative, was the one that performed the test, which is designed to detect envelope leaks by measuring pressurized airflow.

It turns out that both the initial test (at the rough-in phase) and the final test (just before completion) were more eventful that you’d have thought for such a sophisticated building. Seville writes:

The initial rough test was, for lack of a better word, a little rough. It was scheduled at an early phase in construction, after the exterior sheathing and air barrier was installed, to allow for access for any required air sealing measures. At this stage, some windows and doors were not yet installed, and sealant work was not complete, but interior finishes needed to proceed and keep the project on schedule. With a lot of tape and plastic, we were able to get a reasonable measure of the overall leakage. At this stage it was above the target .15 CFM75/SF Building Envelope, but given that some work was still incomplete, the team was satisfied with the result.

The final test was when things got a little weird. First, Seville and company looked for the potential leaks that they typically find in buildings — missing weatherstrips, windows that weren’t fully closed, shut dampers. The first test of the day came out was allowing 3000 more cubic feet per minute through the building than the Living Building Challenge requires. Those corrections didn’t significantly reduce the leakage.

The big brainstorm came with my partner Abe Kruger started asking about the rainwater cisterns, as they were connected directly to the outside through the roof drains. We were directed the first flush filters for the system which were two large steel boxes near the ceiling of the main floor. The first one we inspected had a loose cover on it that was allowing a significant amount of air to leak around it when the test was underway. We taped it closed for the test, noting in our report that it will require a gasket and fasteners to keep it sealed. The 2nd filter was located about 20 feet above the floor, a bit high for a stepladder. Thankfully, one of the Johnson Controls technicians was on site and drove over in his lift to look at that filter box. Surprise – there was no cover, creating a large hole in the building. We cut a temporary cardboard cover which was taped in place, and voila!, envelope leakage was almost exactly what was targeted. One other area that showed noticeable leakage was a manhole cover over a cistern, which will also require a gasket.

Finally, the results came to what everyone expected.

Samantha Morton, our in-house multi-fan guru set the baseline, then ran 10 second depressurization tests at a range of pressures from 30 to 80 Pascals, resulting in an overall leakage of 9,941CFM, working out to .14 CFM75/SF building envelope, beating the intended .15 target. 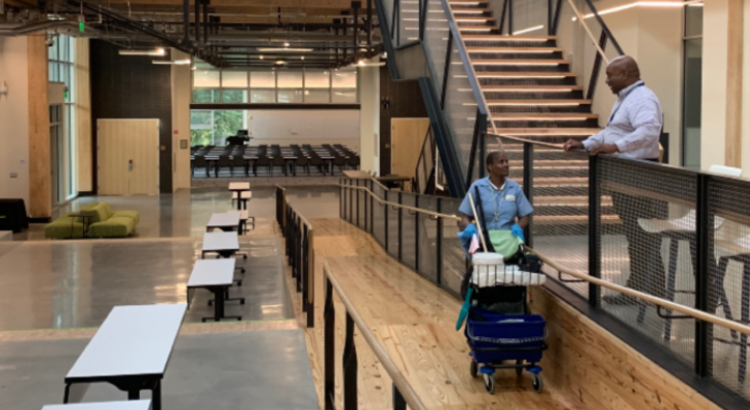