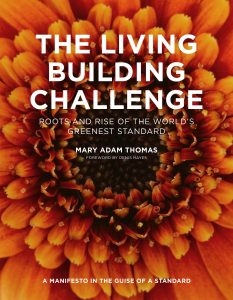 A new book offers up the most complete history yet of the Living Building Challenge. The Living Building Challenge: Roots and Rise of the Worlds Greenest Standard by Mary Adam Thomas is a supportive view of the standard from inside the movement. It was released last month by Ecotone, the Living Futures Institute’s in-house publisher. Excerpts below focus on the Challenge’s birth, its relationship with LEED and the thinking behind its “Petals” structure.

A MARKET ADJUSTS ITS ATTITUDE

The story of how the Living Building Challenge came to be and came to thrive is not a linear one. Yes, there are specific dates when certain milestone events occurred, but the overall tale of the Challenge’s gestation, birth, and maturation is difficult to tell in a strictly chronological fashion. In fact, it could be said that the Living Building Challenge evolved when and how it did because of the very imprecise nature of the market it intended to serve.

The green fervor that grew quickly in the design-build industry during the 1970s and early 1980s inexplicably died down and remained relatively dormant well into the 1990s. During that quiet period, there were a handful of vocal practitioners ([Jason McLennan’s boss Bob Berkebile] among the loudest of them) touting the importance of environmentally sensitive architecture, but those advocates were in the extreme minority. The U.S. Green Building Council (USGBC) wasn’t founded until 1993 and it took another seven years to launch LEED in 2000.

By the turn of the millennium, both the supply and demand sides of the industry — designers and clients alike — finally seemed open to the idea of sustainability. People were ready to talk about change, and LEED unquestionably helped start the conversation.

As one of the first-ever codified programs, and the first to be introduced on a national scale in the United States, LEED helped define and identify the benefits of green design. It created a preliminary common language for a movement that was not exactly young, but was only just getting organized. It also helped prove that green buildings did not have to be strange looking or cost-prohibitive. In short, LEED legitimized practices that were previously categorized in the periphery.

But as more project teams pursued LEED certification for their buildings, a handful of architects — Jason F. McLennan among them — felt that the standard fell short. He was pleased to see more professionals getting exposed to green technologies and systems in order to comply with LEED requirements, but it only proved what he and others of like mind had been saying for years: that accomplishing these goals was not terribly difficult to do when knowledgeable teams of people applied the proper techniques on behalf of engaged clients. If LEED Platinum was the farthest-reaching green standard and it was designed only to do less environmental damage, then it was time to extend the boundaries. The industry was ready for a standard that was actually curative.  …

TRACES OF THE FAMILIAR

The six [original] Petals of the Living Building Standard were intentionally reminiscent of LEED’s original six credit categories (sustainable sites, water efficiency, energy and atmosphere, materials and resources, indoor environmental quality, and innovation in design). McLennan agreed that LEED focused on some of the correct categories of environmental design (even though he felt they should be approached holistically, not separately), so he didn’t feel the need to stray from this fundamental six-part construct. In addition, he knew that any new standard had to seem at least familiar to LEED if it had any chance of gaining traction among architects and engineers who were only just beginning to adapt to LEED itself.

Still, it was extremely important to McLennan that his Standard relied on the head and the heart; the left brain and the right. So he added a performance area that helped the Living Building Standard stand well apart from LEED: the Beauty and Inspiration Petal.

Calling for aesthetic performance in a building standard, McLennan believed, would help dispel the assumptions that green buildings were unavoidably and consistently unattractive. He had seen first-hand how beautiful sustainable structures could be and wanted to bring others over to his way of thinking. He also knew that for Living Buildings to be successful, they had to convey beauty so that all tiers of the market would embrace them.

So he included the “unquantifiable” among the more tangible aspects of Living Buildings that would need to be measured and proven in order to be certified. Doing so shed light on the notion that even though certain things are hard to quantify, failing to count them at all means giving them a value of zero. And beauty in the built environment, according to McLennan, should always be assessed, appraised, and prioritized.

Across the six Petal areas, McLennan wrote 16 “prerequisites.” (Later, after the Standard had evolved into the Challenge, the term “prerequisites” was changed to “Imperatives.” But the industry was accustomed to LEED’s prerequisite concept, so McLennan opted to include that familiar terminology in the earliest iteration of his manifesto.) However, unlike LEED, the Living Building Standard was not structured around credits. Its prerequisites were not designed as an à la carte menu from which architects, engineers, or owners could pick and choose according to which aspects of the standard they felt they could achieve. The problem with that approach, McLennan felt, was that it tended to entice people to pick the points that were easiest to attain. Instead, all 16 of the Living Building Standard’s prerequisites were required and had to be solved in an integrated, holistic fashion — thus dissolving the idea in practice of there even being categories. In other words, for a structure to be considered a Living Building, it had to meet every one of the 16 performance area prerequisites.

But it was up to each team to determine how to reach those performance goals. Unlike LEED, the Living Building Standard was not prescriptive and relied on the genius of each team to uncover the best solutions for a given problem.

Reprinted with permission of Ecotone Publishing. Click here to learn more or to purchase the book.